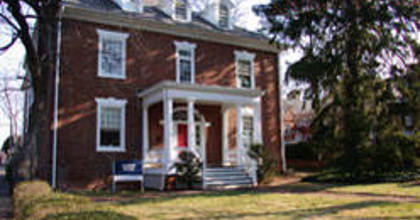 Russell Bennett was a much loved teacher of history on the campus. His home was one of the mainstays of UVA, an ancient building on a plot that was theoretically on the grounds, but owned privately. As such, he was always on the scene, and the students, strangely enough, didn’t see him as intrusive for that reason. He jammed in the parties, and gave out advice, and was a pillar of the community. Though few had been in the house, everyone knew where it was. And they also knew that if they had anything bad happen, they could make their way there, and he’d make it alright.

Then he died. Others live there now, but students make pilgrimages, and it’s not uncommon to see flowers decorating the wrought iron fence that surrounds the property.

Though the building looks like the others that surround it, the Warden’s sanctum is a nexus of ley energy on the campus- a perfect place to house the White Council’s representative.

Ascendant campaigns can view previous versions of their pages, see what has changed (and who did it), and even restore old versions. It's like having a rewind button for your campaign.

We've already been saving your edits, so if you upgrade now you will have instant access to your previous versions. Plus, you get a 15-day free trial, so there's nothing to lose.

I'm sorry, but we no longer support this web browser. Please upgrade your browser or install Chrome or Firefox to enjoy the full functionality of this site.